Ladies and gentlemen, let me tell you a story! A story about a man to be more specific a story of a husband who wished to give his wife a birthday surprise. So the story revolves around our superstar husband, say hubby and our lady in the lead role his wife, say wifey.

So, the hubby and wifey were newly married. And the thing was going absolutely fine when the hubby suddenly realized that it was his wifey’s first birthday after their wedding and he for sure wanted to make it the most memorable one.

Like any other love stories, they did not make one; their story was written and arranged by their parents. They were a very subtle and humble pair; who just like any other husband and wife were trying to do their best to make up to each other. Just to break the ice and start things with a great start, the hubby decides to plan an amazing birthday surprise.

So like, usual he had a lot of time in advance and thought that he will turn the world from head to toe and make things happen just the way he wants and make his wife happy for sure. So, for the starters, he started with planning a birthday surprise.

His part of the planning…..

He planned everything in his head, everything right from the beginning to the end, all he wanted to do. But then there was still this doubt was he up to the mark? Amidst a lot of confusion and brainstorming, he still felt reluctant about his birthday plan and was not very keen about the execution part.

After all that he was planning for what was the first Birthday Surprise Gift for Wife after Marriage, he wanted to give her everything. Everything! A surprise birthday party and surprise birthday gifts for wife and many things more to it!

Then one fine day, when he was still confused and vary, just like the knight in shining armour, he found this amazing website and surprise organizing company called “Book The Surprise”. So now the deed was to find out what exactly did they do? And will they help him out in any chance?

He collected all his guts and dialled the number that flashed on the screen. There was no response! He took a deep breath and tried his luck again! This time the phone was answered and he was enthralled.

The next is what we call the best part of the story. Okay, after his call was answered, he spoke just very few words; he was doubtful whether the company would understand his urge and the most important motto that he has in his mind “first birthday surprise gift for wife after marriage”.

The Longest call of assurance…….

After the longest call, and a few minutes of discussion about the event with the person who was the in charge of this party organization satisfied he then confirmed the surprise birthday party and surprise gifts. He got back home relaxed and had a genuine smile and was fluttering on the inside.

The words of assurance that our planner gave him left him amazed! The organizer told him “Sir, we are a surprise party organizing company. We have really good concepts and plans for a surprise party.” He also said that they could organize for a surprise at any time and any place that he wants. “We understand your excitement to give your first birthday gift for wife after marriage and at the same time we understand the difficulty that you face during planning the birthday surprise, so just leave the pain of arranging a surprise birthday party and birthday gifts for wife. You just tell us what are you expecting from us as a surprise birthday gift for wife?” This got the hubby even more excited.

It was just like any other day when they were together at their place and just as usual were chattering. Little did the wife know anything about the surprise party her better half had planned for her! So, it was a bright and sunny day and somewhere in the middle of the day they heard a knock at the door. The husband knew what it was, but the wife still confused and tensed opened the door!

She went towards the door to open it. She opened the door with her nervous and sweaty hands. Within moments there was a loud sound “pop” and there was confetti everywhere. It was a party popper; with that, her nervousness was then replaced with excitement.  There was a guy standing at their door. A guy with all amazing birthday wishes at wish board waiting for her!

She read all the amazing messages that he had for her, and then she was shown the birthday surprise, wish board. She still had no clue it was her husband who planned all of this with the help of “Book The Surprise.”

She was given a bouquet of beautiful roses and then followed by an amazing cake cutting ceremony. And finally, after a long wait, it was finally revealed to her that it was no other than her lovely and beloved better who had planned it all for her as a first birthday surprise gift for wife after marriage.

She was taken aback by the utmost care and concern. She could not hold her happiness and this feeling was just so warm and overwhelming for her! There was more to the surprise birthday party, they were many surprise gifts for her plan in a very personalized and exciting way. She just loved all of the gifts and the surprise party.

We were so touched by their feedback and then finally we were relieved from our huge responsibility!

We, Book The Surprise, wish you all the very best for your future and hope that we just surprising each this way just to strengthen your bond.

Here is to some more awesome surprise ideas that will melt your heart!

From the minute you get to know that you are a Mama-to-be, you have so many things juggling in your... read more As your parents pause and go back to the day they got married, how wonderful it is to realize that... read more “My Father Gave Me The Greatest Gift Anyone Could Give Another Person… He Believed In Me!” ~ Jim Valvano To every... read more 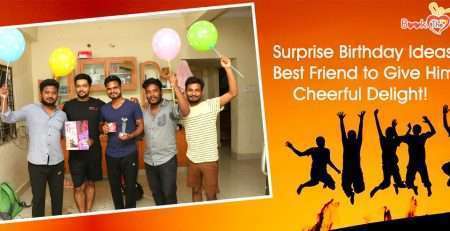 Treat Your Lady Love With Some Birthday Gifts For Wife From Husband That Are Straight From The Heart!

The first person that comes to your mind when you think of love is your better half, right? They give... read more

An 18th birthday is said to be a tremendous celebration that marks the end of one’s adolescent days. It comes... read more

Enticing Birthday Surprise Ideas For Daughter From Team BookTheSurprise – Let The Twinkle Of Your Eye Sparkle With Delight!

A little girl is like an angel who is yet to spread her wings. She is the wish that her... read more A Best Friend Birthday Surprise Filled With Wonder And Joy – Celebrations That Were A Class Apart!

Friendship is that emotion that has so many feelings untold, yet it is one of the strongest bonds in the... read more